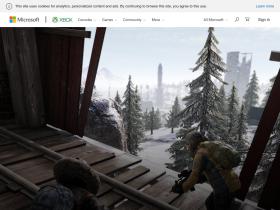 great UI, great game choice, the only issue I have is the community is pretty toxic and their system for dealing with reports can use some work.
Jason
2021-06-16 15:20:38

Just buy an Xbox one

So to start this review the Xbox series S (that is the console I currently own but I’m sure the series x is the same) is a great console, faster loading times, enhancements to visuals (if you have the tv for it) it’s a nice size console that doesn’t look out of place, However that doesn’t excuse that it’s a bit of a scam in regards to memory storage and the way that the Xbox series X/S handles some games, for example I only have a HD tv (I’m not about to spend money on better resolution or whatever) and the series X/S consoles force you to download an enhanced copy of the game, now that wouldn’t be a problem except some of these games for example Halo: Master chief collection that’s over 130GB of a game meaning I’ve used half of the internal storage but here’s the thing I have a 10TB External Hard drive but the games won’t run off of the external hard drive meaning Microsoft force you to spend £150 in uk currency on external 1TB Storage on top of the console and to top it off some of the games automatically upgrade to X/S Quality meaning you have no choice but to have these games installed on your internal hard drive in my opinion if you’re going to buy a next gen console then be prepared to spend way more money on external storage it’s a scummy way to make more money and I’d rather just have an Xbox one
Reddy Shiva Shankar
2021-05-24 05:55:54

The Xbox consoles have always allowed enhanched retro-compatibility with the 2001 Xbox and the 2005 Xbox 360 consoles games, Playstation instead forces you to buy the games AGAIN from sctrach (and just a very little amount of the PS1\PS2\PS3 games are available).
Heri
2019-10-16 07:31:32

Xbox one is the best

hey xbox please read this review I need help with my controller basically you know that button with the three lines when I press it to pause a game nothing’s happening I have tried every thing this has gone on for a few months now it’s really annoying because on some games without it I can’t play them and I have paid to play them it’s extremely annoying how do I fix it ?
Ben johnstone
2019-04-16 07:14:17

Does what it’s designed for

Not sure why so many people leave bad reviews; the website normally works, you can order and instantly access products and use the website to get the latest info, and even service status reports for Xbox live/online features... what more do you want?
Emma
2019-11-10 11:50:43

Service is meh at best